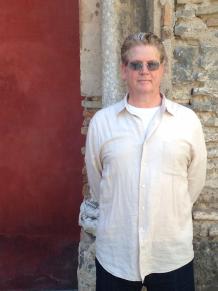 Zach is an American associate professor staying in Madrid to study the paintings of Fernando De La Cruz. Terese is the curator of the gallery, an adept conversationalist who takes an interest in the young professor. A brief conversation in front of the painting becomes lunch at a cafe, and soon they are back at her apartment, examining a lost painting by the missing master. Fernando is her former lover, but the intrigue doesn’t stop there. The truth is malleable in this psychosexual thriller, but so is the genre.

Zach, played by Christian Durso, is tasked with playing the straight man to Vivia Font’s dizzying Terese. Her text flourishes with academic embellishments, cutting through Zach’s psyche with supernatural precision. The part requires Font to be charismatic and sexy, and to turn emotionally on a dime. Font does not disappoint, but even she cannot bridge some of the stranger swings from sincere poetic passion to comic flippancy. Durso navigates his arc with a masculine intensity, sometimes enacting the audience’s incredulity at the wild events.

The plot’s complexity and the joy of the comedy win out in this stage noir. Chris Ceraso’s Blind Man is hilarious. The witty language stimulates like a Cary Grant classic. The twists and turns keep us guessing to the end. For all its strangeness, it’s a satisfying show.

I am very delighted to say my play Fernando is in this year's Ice Factory Festival at the New Ohio Theatre in NYC. Jamie Richards directs with these brilliant actors: Vivia Font, Christian Durso, and Chris Ceraso. We open the festival on 6/28 through 7/1. The festival itself runs until 8/12. It is the coolest summer festival in New York and everyone agrees. So come!